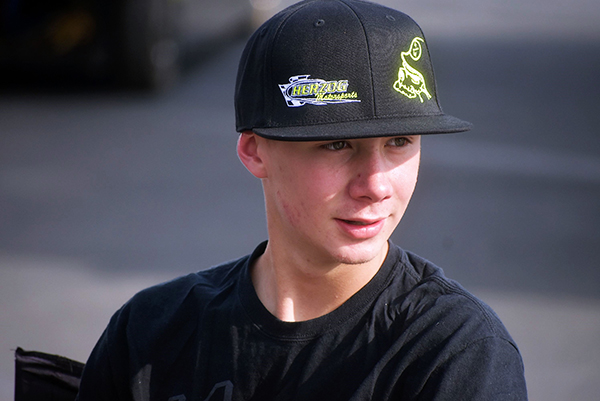 CLOVIS, CALIFORNIA (May 1, 2018) – Clovis’ Austin Herzog, 15, has taken the lead of the prestigious RPM Mortgage Pro Late Model standings at Madera Speedway after the series completed its third race on Saturday.  Herzog was the 2017 Rookie of the Year in the MAVTV-televised division in his #11 Late Model.

Herzog advanced into the Pro Late Model division after winning six 51FIFTY Junior Late Model Series races at the track across 2016 and 2017.  He also has one NASCAR K&N Pro Series, West start in his career with a top-ten finish along with four Super Late Model top-tens in five SLM starts.

The $5,000 to win season opener in March saw Herzog qualify sixth and finish fifth in the 80 lap race on the one-third mile oval.

Herzog came closest to victory in round #2 on Sunday April 8th.  Herzog went toe-to-toe with Madera’s all-time winningest driver Matt Erickson.  Herzog set fast-time in qualifying and led 15 laps of the race.  He engaged in a constant battle with Erickson until six laps to go when he spun while challenging for the lead.  He had to settle for an eighth place finish.

Herzog’s drive on Saturday in the third race of the year was perhaps his strongest.  He was an innocent victim in a multi-car crash at the start of the event.  Undeterred, he chipped away at the field and cracked the top-five for the lap 40 halfway break for MAVTV interviews and car adjustments.

He continued to advance coming out of the break, putting on a great battle with Jack Wood for the second position.  With six laps to go, Herzog took over second but he ran out of laps to reel in race leader Blaine Rocha.  His third top-ten of the year, in a series averaging over 30 cars per race, was enough to propel him into an 11 point lead over Matt Erickson in the standings.

“I never would have though we were going to come out in second with the points lead,” Herzog said.  “We’ve been experimenting a bit with the car this year and I feel we have found something.  We want to race for a championship and get some wins along the way.”

The RPM Mortgage Pro Late Model Series has six races remaining, with the next event on May 26th for the Military Tribute Night.  Herzog intends to race for the 2018 championship at his home track, where his father Bryan was a championship contender in 2015.  Herzog also aims to compete in additional NASCAR K&N Pro Series, West and Super Late Model races as well.  His ARCA debut is on the checklist for a goal before the year is done as well.  Potential partners are needed and encouraged to contact austinherzogmotorsports@gmail.com