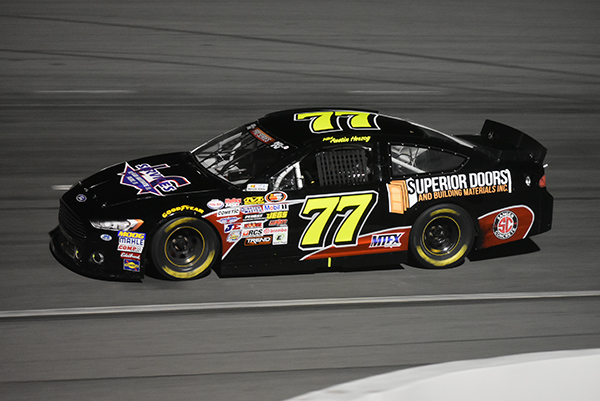 “Its crazy.  We worked so hard to get into this race.  Hopefully we can figure something out for the rest of the year,” Herzog said.  “I would really like to drive for Jefferson Pitts Racing.  They’re by far the best K&N team for me and my family.  I feel ready and I can’t wait to get back in this car.  It’s a whole another level.  I think we’ll just settle in and get where everyone else is pretty soon.”

Herzog ran as high as sixth in the final practice session during the afternoon and qualified 11thfastest out of the 23 competitors on hand.  The race’s youngest driver, Herzog got underway in the midst of heavy battling early in the race.  By the 50th lap, he had moved past Rod Johnson, Jr. for 12th place before Johnson got back around him before the lap 65 break.

Adjustments led by crew chief Charlie Wilson freed up the car and allowed Herzog to engage in an entertaining duel with fellow Jr. Late Model graduate Hailie Deegan.  Herzog went around Deegan on the outside for ninth before a caution flag.  On the ensuing restart, the duo went toe to toe for another half dozen laps with Deegan getting the position on the outside herself.

Herzog was running 12th at the second and final scheduled break at lap 125 and elected not to pit.  The restart proved strong for Herzog as he darted back into the top-ten and ran in a closely wound pack the rest of the way.  Things began to tighten up on the final lap.  An incident in front of Herzog allowed him to sneak through for an eighth place finish at the stripe.  Herzog also managed to be the second highest finishing JPR entry as well.

“My crew chief gave me an awesome handling car.  We got a little tight halfway through the race but that just goes along with tire wear.  Without him giving us that perfect car we wouldn’t have been able to get through the field like we did.”