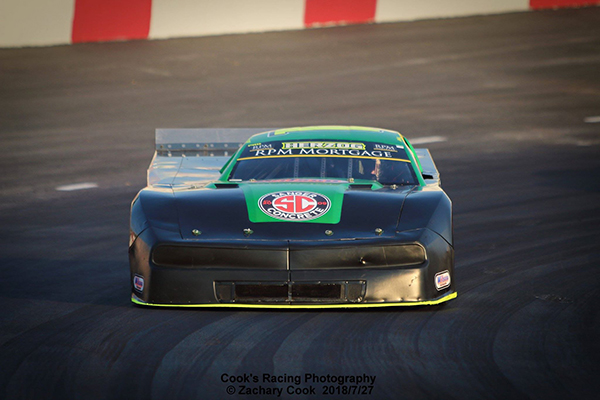 The afternoon on the one-third mile opened with Herzog qualifying third, .028 seconds off of fast time.  The effort earned him two points in the championship and he also drew the pole for the start of the race.  Herzog fell back to third early in the race and battled back-and-forth with Jason Aguirre into the halfway break at lap 50.

“We were having a couple of problems at the end of the first half with the car,” Herzog said.  “We talked over the radio on the cautions and came up with a game plan for the break.  The adjustments from Charlie Wilson and the crew helped a bunch.”

Coming out of the break, Herzog and Aguirre slid across the track and Austin fell back to seventh.  The second year driver showed composure and went to work, steadily climbing through the pack.  He battled for second place with both rookie Adam Lemke then second in points Matt Erickson, finally taking the spot for good on lap 83.  He held off Erickson over the final four laps to take second at the yellow checkered flag lap 87 finish.

“The team is due for a win at Madera with all the consistent work in the shop and at the track,” Herzog said.  “It is a big accomplishment to be running with one of the best drivers at Madera in Matt Erickson.”

He will take a 16 point lead in the championship into round #7, Saturday August 25th at Madera Speedway.  80 laps of RPM Mortgage Pro Late Model Series racing are scheduled.  Herzog has five top-fives and six top-tens in the series with an average finish of fourth this year.