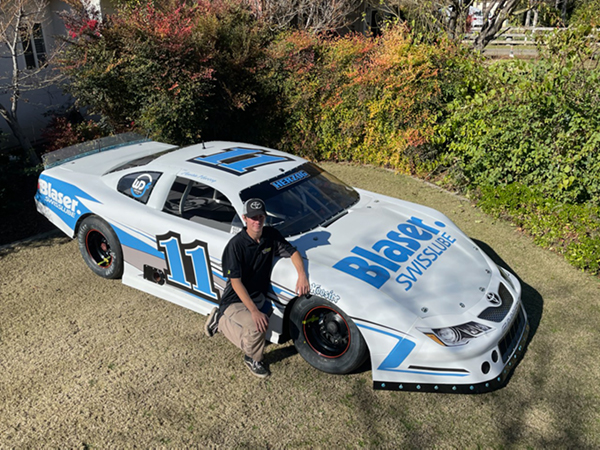 CLOVIS, CALIFORNIA (February 3, 2021) – 18-year-old Austin Herzog will carry the colors of Blaser Swisslube during the 2021 MAVTV-televised Pro Late Model season at Madera Speedway. The 2019 Nut Up Pro Late Model champion and six-time 51FIFTY Jr. Late Model winner has partnered with Blaser Swisslube as the title sponsor on the #11 Toyota Camry for the nine-race series. This weekend’s All-Star Showdown at Irwindale Speedway will mark the debut of the partnership which will also see Herzog competing in selected Pro Late Model events across California.

Races for the new partnership are aired during Madera Racing on MAVTV, airing at 7pm Eastern and 4pm Pacific on Mondays throughout the year. Madera’s season begins on March 13 and culminates during round nine with the ninth annual Short Track Shootout on October 2.

“I am honored to represent Blaser Swisslube during this year’s Pro Late Model season,” Herzog said. “We aim to put Blaser into the winner’s circle and into the machine shops of the motorsports industry.”

This weekend’s racing from Irwindale Speedway will pay $15,000 to win in the 150-lap contest, streamed live on SPEARSRacing.TV The race will also be televised in tape-delay on MAVTV.