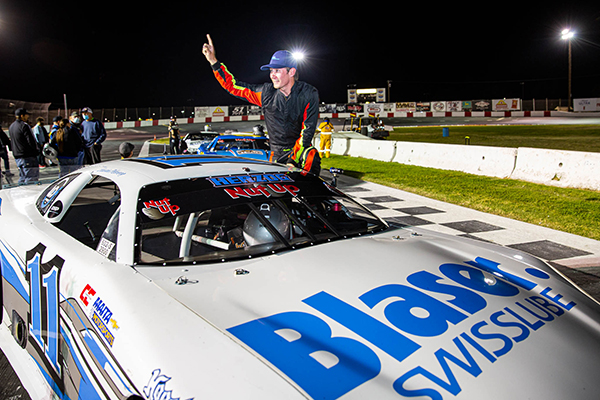 CLOVIS, CALIF. (April 27, 2021) – Third-generation stock car driver Austin Herzog, age 18 out of Clovis, Calif., drove the #11 Blaser Swisslube Toyota Camry to the checkered flag in Saturday night’s Nut Up Pro Late Model Series round three at Madera Speedway. Competing in the event broadcast live on YouTube and taped for later airings on MAVTV, Herzog extended his championship points lead, with the 2019 champion re-establishing his position at the top of the competitive central California series. Photo by Jason Wedehase

Herzog qualified fifth but drew the third starting position for the 80-lap race. Herzog used the outside line to advance past 2020 Jr. Late Model champion Bradley Erickson in the early laps of the event. He then restarted inside race leader Seth Wise after a caution on lap 27. Herzog fell in behind Wise heading into the lap-50 break for adjustments and MAVTV interviews.

“Actually about 20 laps ago the shifter (broke). Those last two restarts we were stuck in third gear. We have a good car and I’m so thankful,” Herzog said at the break. “We’re going to make a few adjustments to try to work the bottom in better.”

Herzog continued to follow Wise coming out of the break before slight contact gave Herzog the lead on lap 54. A battle between former champions Austin Herzog and Matt Erickson ensued over the final five laps, with Herzog driving ahead from a pair of challenges from Erickson to grab the victory. The victory along with halfway break points for finishing second extends the points lead for Herzog in the Nut Up Pro Late Model championship.

“My crew made some really good adjustments. Last year it was hard for us. I never lost faith in my team. We’re just going to keep digging and see what we can do this year,” said Herzog.

The Blaser Swisslube-supported team continues with upcoming rounds on May 22 and June 26. Races are broadcast for free online on ShortTrackTV on YouTube and televised Mondays at 4:00pm Pacific on MAVTV. MAVTV is available on channel 214 on DirecTV and also on MAVTV Plus.